SCORE ONE FOR LOVE
Name of cover designer: DELAINE ROBERTS 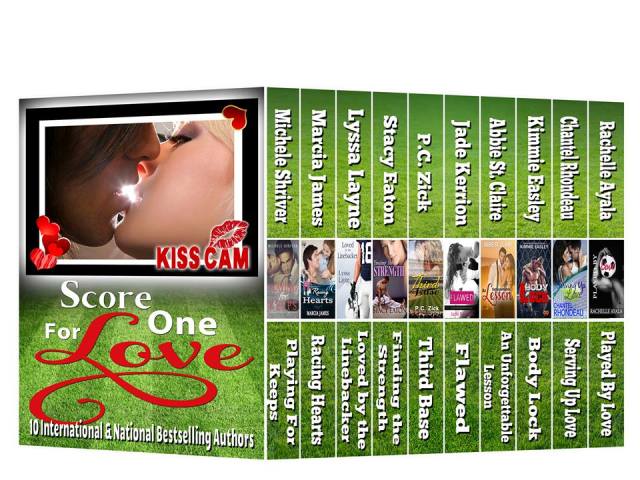 Score a touchdown with this fantastic collection of 10 romance novellas from award-winning authors. Football, hockey, soccer, baseball and so much more—there’s a sexy story for every sports fan and every lover of romance. So, grab your copy today because everyone’s a winner when you Score One For Love!

Hockey star Colton Tremblay’s bad-boy reputation got him traded from Montreal to the expansion San Antonio Generals. As a female reporter, Maya Dominguez can’t afford distractions from the players she’s assigned to report on, but Colton is used to getting what he wants. Can he persuade Maya that this time, he is playing for keeps?
Marcia James- Racing Hearts

Lyssa Layne- Loved by the Linebacker

When sports agent Camila Lemos and linebacker Evan Purser meet, anything but sparks fly. When the walls are broken down, will a touchdown be scored or will it be yet another fumble for both?

The night Tayla Adams is attacked, Third Degree Black Belt, Cam Giles steps in and stops the violent man. Little did Tayla know that when she takes a self-defense class she will come face to face with her knight in shining armor, but can Tayla learn to defend herself, and gain enough confidence to protect the two of them when the time unexpectedly comes?

Baseball star Tomas Vegas puts all his energy into winning the World Series, until he meets the widow Adriana Moretti. His supermodel ex-girlfriend and Adriana’s tightly-knit Italian family threaten them, but the more they’re pulled apart, the more they silently yearn to be together.

When burned-out actress Ariel Falconer meets professional beach volleyball player, Jake Hunter, their mutual attraction is immediate and scorching, but neither is ready for the emotional complications of false impressions and clashing expectations. Can Ariel and Jake escape unscathed, or will their conflict shatter their dreams and the promise of love?

Huck Tyson hates golf. Period. When it’s suggested that he learn to play for his day job’s camaraderie, he’s less than welcoming of the idea, although desperate to advance his career. Amelia Berringer, the club’s only golf pro, doesn’t expect her student to be quite so negative and meets Huck’s sarcasm with a snarky bite of her own. However, neither of them expect romance to rise from the greens.

Melanie Rush has a huge crush on her coach, Ethan Patterson. He has strict rules against relationships within his tennis program, but Melanie wants to break them all. She’s determined to make Ethan hers, no matter what it takes.

Soccer goalkeeper, Jaden Sloup, has his eye on Ella Kennedy, a woman who won’t date jocks or frat boys. When Ella discovers his ruse, she runs into bullies who force Jaden to fight and prove that jocks and frat boys can be good guys too.

Michele Shriver writes women’s fiction and contemporary romance. Her books feature flawed-but-likeable characters in real-life settings. She’s not afraid to break the rules, but never stops believing in happily ever after. Michele counts among her favorite things a good glass of wine, a hockey game, and a sweet and sexy book boyfriend, not necessarily in that order.
Marcia James writes hot, humorous romances and finaled in eleven Romance Writers of America contests before selling her first comic romantic suspense, At Her Command. Her latest releases are Sex & the Single Therapist (a comic romantic mystery), Heating Up the Holidays (a romantic Christmas novella), and Love Unleashed (a super sexy reunion romance). In her eclectic career, she has shot submarine training videos, organized celebrity-filled nonprofit events and had her wedding covered by People Magazine. After years of dealing with such sexy topics as how to safely install traffic lights, she is enjoying “researching” and plotting her novels’ steamy love scenes with her husband and hero of many years.
Lyssa Layne is first, and foremost, the proud momma to her precious daughter, AR. In addition to working full-time and being a mommy to AR, she is also an avid St. Louis Cardinals fan, a runner, blogger, and an infertility survivor.
Having watched one too many medical dramas and being inspired by author Rachelle Ayala, who introduced her to the world of indie writing, Lyssa decided to try her hand at writing a romance story. Her attempt turned into the Burning Lovesick series. You can find Lyssa’s own interests throughout her stories although all stories are fictional.
Stacy Eaton began her writing career in October of 2010 and as each goes by, she releases more and more novels. She is a police officer by profession and has been since 2000. Currently, she is assigned as the department detective and enjoys digging into cases and putting the pieces of the puzzles together; not only with interview and interrogation, but by utilizing her certified CSI training.
Stacy resides in southeastern Pennsylvania with her husband, who is also in law enforcement, and her tween daughter who is working toward her second degree black belt and on the choral and cheerleading squads at school. She also has a son who is currently serving in the United States Navy.
Stacy is very involved in Domestic Violence Awareness and currently servers on the Board of Directors for her local Domestic Violence Center. When Stacy is not working her demanding job, or spending time with her family, she works on her business and volunteers with the World Literary Café.
In between all she does, she spends her spare moments plotting and every other moment writing.

P.C. Zick describes herself as “a storyteller no matter what I write.” And she writes in a variety of genres, including romance, contemporary fiction, and nonfiction. She’s won various awards for her essays, columns, editorials, articles, and fiction.

Many of her novels contain stories of Florida and its people and environment, which she credits as giving her a rich base for her storytelling. “Florida’s quirky and abundant wildlife – both human and animal – supply my fiction with tales almost too weird to be believable.”

Her fiction contains the elements most dear to her heart, ranging from love to the environment. All of her novels contain elements of romance with strong female characters and descriptive settings. She believes in living lightly upon this earth with love, laughter, and passion, and through her fiction she imparts this philosophy in an entertaining manner with an obvious love for her characters, plot, and themes.

Jade Kerrion is the author of the Double Helix series, which has won a total of eight science fiction awards, including the Gold Medal in Readers Favorites 2013. Her Guild Wars fan fiction was accused of keeping her readers up at night, distracting them from work, housework, homework, and (far worse), from actually playing Guild Wars. And then she wondered why just screw up the time management skills of gamers? Why not aspire to screw everyone else up too? So here she is, writing science fiction, fantasy, and contemporary romance novels that aspire to keep you from doing anything else useful with your time.
Abbie St Claire I’ve spent many years crafting stories in my brain. Finally, after the encouragement from those that love and support me the most, I put my first story out by self-publishing in 2013.
That first milestone created a writing monster in me that couldn’t be stopped and filled a void I cannot explain. Each story is a true gift from my heart and a sacrifice from my soul, since I find it difficult to let the characters go.
At home in Texas, my husband and I share our life with children that mean the world to us and include a couple of fur babies. When we aren’t busy watching sports and betting on the game, we are entertaining with friends.
I do have a writing cave, but honestly, most of my work comes from the kitchen, the heartbeat of any home. Since noise doesn’t disturb me too much when writing, I can write and keep the pulse on the family at the same time. And… Possibly enjoy my favorite, sinful treat… Cookie dough!
The writer-reader world is my lifeline. I’m addicted and each time I get a message from a reader, I’m thrilled. There’s quite a few stories planned for the next several months. I’m hoping the readers fall in love with my next series, The Creek Series. A story that is guaranteed to bring out all the emotions.
Kimmie Easley is an author who grew up traveling the country, rarely settling in one place for much longer than a minute. Being no stranger to heartache, she allows her unconventional childhood to fuel her writing.
Kimmie is addicted to all things books, wine, cupcakes, and flip flops. She is a homeschool momma, southern wife, and pug wrangler.
Kimmie can be found somewhere in the south writing wine worthy stories.
Gutter Princess coming in 2015 from Swoon Romance.
Chantel Rhondeau once thought a great mystery or fantasy book with strong romantic themes was the highest level of reading bliss. After reading her first romantic suspense novel, she never looked back. Before long, the need to create her own stories took over. She spends her daytime in the clinical profession of medical transcriptionist, but her passion is in the wonderful hours she spends with her characters in the evenings.
Chantel lives in the western United States, and when she isn’t writing she loves playing cards with her family, bowling, and snuggling with her lazy kitties.
Rachelle Ayala is a bestselling author of dramatic romantic suspense and humorous, sexy contemporary romances. Her heroines are feisty and her heroes hot. She writes emotionally challenging stories but believes in the power of love and hope.
Rachelle is an active member of the California Writer’s Club, Fremont Chapter, and a volunteer for the World Literary Cafe. She is a very happy woman and lives in California with her husband. She has three children and has taught violin and made mountain dulcimers.

2 thoughts on “Score for One Love by Delaine Roberts”